Fatea Review of “Where the Good Hearts Dwell” By Kath Reade

It’s not very often that you get a second bite of the cherry, especially when the cherry is an opportunity you weren’t able to take advantage of in your youth. One person who has had such a second chance is Kath Reade.

Born and raised in London, Kath got her first guitar at 16, at 17 had written her first song and was performing at the legendary Herga Folk Club in Harrow. Soon after that Kath was offered a recording contract by Polydor but she turned it down when her father insisted she get an education first.

Life then took Kath to Lancashire via Italy and into a life of community action and helping others, establishing the first dedicated women’s refuge in Burnley, becoming the first woman leader of Burnley council and becoming chair of a local NHS primary care trust.

Now, Kath has embarked on a different path by re immersing herself in music, both as a performer and as a sound healer, but her previous life has not been left behind with her latest CD being a collection of original songs inspired by the people she has encountered during her time working in the community in the North West of England.

In Where The Good Hearts Dwell we meet and get to know characters like the fiercely independent Edith, raging against the dying of the light as she sees out her final days in a nursing home. We also hear The Ballad Of Lily McQueen who, in times past, would have probably been sentenced to transportation. Lily’s story also lifts a lid on the impact corporate decisions can have on an individual and may make you think again about where you shop in future. Little Johnny Burnley is the neglected kid, left to bring himself up by an uncaring parent but who still has big dreams.

Other songs deal on the album deal with more abstract concepts, Where The Good Hearts Are, is a tale of unexpected pride in a community and of finding hope in the darkest of places. Envy The Ravens encourages us to take pleasure in the natural world as an escape from the trials of daily life and the depressing news that bombards us every day from a variety of media. North Country comes across as a love song for Kath’s adopted home. Even the one traditional song on the album, The Four Loom Weaver, has a resonance in today’s world of low wage, low security, zero hour contract jobs On Where The Good Hearts Dwell, Kath Reade successfully mixes a range of genres from Folk and Americana through to Jazz with intelligent songwriting to produce an excellent album that is poignant, uplifting and comes from the heart. I haven’t tired of listening to this CD yet and I suspect you won’t too quickly either.

“…poignant, uplifting and comes from the heart.” 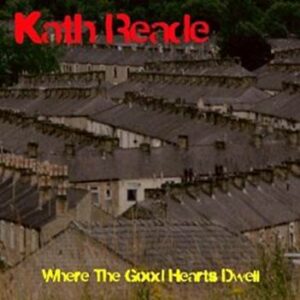