A live performance from Kath Reade is unmissable. She is an artist who is not afraid to expose her inner being as she touches yours. Her honest lyrics and compelling melodies enthral with a stunning delivery, deliciously infused with the warm spice of humour.

Kath performed songs from her past albums as well as the recently released and aptly titled ‘Devotion to Song’. She started with the soothingly beautiful ‘I am on a Journey’, a song inspired by the simple joy of walking hand in hand with her husband on holiday abroad.

Each song’s accompaniment expertly enhanced the listener’s experience without being fussy or overbearing. The unobtrusive finger-style guitar in ‘Gypsy Eyes’, on which the lyrics rode comfortably: the driving beat, reflecting her rock’n’roll pedigree, in numbers such as ‘Starting Now’: the atmospheric plunking of the African thumb piano on the Maya Angelou poem ‘Come and Be My Baby’ which Kath set to music: the Indian Shruti Box drone in her traditionally styled ‘The Cabin Boys Initiation’, whereas ‘Kathleen’, introduced by Kath as perhaps a song for a daughter she never had, was sung a capella.

The crafting of her songs, the warmth of her demeanour, and her unassuming manner ensured that by the end we felt we had spent quality time with a good friend.

Kath Reade’s multi-textured vocals dipped and soared, seemingly with ease, which, along with a relaxed and almost wicked sense of fun emerging between songs, ensured that her audience were fully engaged.

Many of her compositions invited audience participation, from the slightly flippant “Hey nonnie no, ho nonnie no….” in ‘Life is Like a Shakespeare Play’, to the gentle balladic chorus of her autobiographical ‘Song of the Irish Exile’, telling of her Irish roots with obvious affection.

While it was the wealth and variety of Kath’s own songs which gave the concert its shape and character, towards the end she inserted an occasional old favourite: Dylan’s ‘Forever Young’……Paxton’s ‘Last Thing on My Mind’, and convincingly rockin‘ onwards with ‘Money Honey’ and ‘Whole Lotta Shakin‘, setting feet a-tapping and the shelves of bottled Todmorden-brewed ale a-jangling.

By the end of the performance it was plain to see that Kath had delighted  all present. The crafting of her songs, the warmth of her demeanour, and her unassuming manner ensured that by the end we felt we had spent quality time with a good friend.

A few words from Kath after the gig:

Sounds like hard work? But I loved it – three sets of old and new songs of mine and managed to do a few requests. A Scot called Andrew asked me to do something Scottish so I sang Robbie Burns’ “John Anderson, My Jo” – the raunchy version!

The wonderful singer-songwriter, Rahel Guzelian (one half of Otra with lovely Tony Charnock), asked me for ‘Hang There Hawk’ from my CD ‘Kingfisher Blue‘ . I obliged and she wrote an ‘on the spot’ review of my live performance and told me it was approved by everyone on her table. Thank you so much Rahel, I’m glad you enjoyed it.

As well as my beloved Gibson and Fylde guitars, I sang to the Shamanic drum, the Indian harmonium, and the African thumb piano, surprising the audience and myself at the end with an impromptu unaccompanied version of ‘Smile’ – Judy Garland’s classic. Well, you have it to do as they say!

It would be great to see you at my live performances – sign up to my newsletter to be kept informed.”

“A live performance from Kath Reade is unmissable. She is an artist who is not afraid to expose her inner being as she touches yours.” 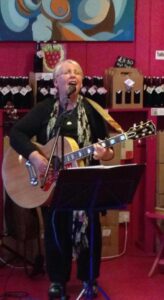